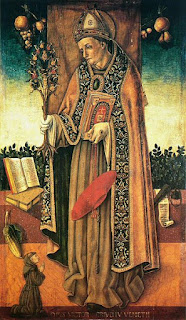 Saint Bonaventure was the almost exact contemporary of Saint Thomas Aquinas (1225-1274). The ‘Angelic Doctor’ (Thomas) and the ‘Seraphic Doctor’ (Bonaventure) were the two great brainy saints of the thirteenth century, and indeed of all time. They were both Italians, Bonaventure hailing from Viterbo, and Aquinas, obviously enough, from Aquino. In their time, before the founding of the Jesuits, the Franciscans and the Dominicans, the two new mendicant orders to which Bonaventure and Aquinas belonged, were rivals. Aquinas is the model Dominican theologian (I recently caught a Dominican writing, ‘our father Saint Thomas’, and had to point out to him that ‘our Father’ in the order is Saint Dominic). And as I will say later, Bonaventure really did take up the baton from Saint Francis in an important way. So these two great saints, Bonaventure and Thomas, are often taken as rivals, as if they had been competing athletes, like two tennis champions of the same age who year after year batted it out in the Wimbledon final.

Because they were the two leading lights of high scholastic theology, Thomas and Bonaventure have often been contrasted, and indeed, to put it more strongly, theology has often made the two saints to represent two opposing paths in theology. The Franciscan Saint Bonaventure is made to represent a rigorist, anti-intellectual, Augustinian path, whilst the Dominican Thomas Aquinas is taken as a model of pro-intellectual, Aristotelian theology which is tough-minded, inclusive and open.

There is some truth in the contrast, but also a mistake. Let’s start with the mistake. It’s a mistake to think that Aquinas was a mediating, inclusive theologian and Bonaventure was not. Aquinas’ great vocation was to mediate Aristotle to his contemporaries. He had to ‘baptize Aristotle’ for his contemporaries because a determined group of people in the Latin West were set upon taking up the new discovery of Aristotle’s writing and using it to promote untrammeled naturalism, secularism and a radical separation of philosophy and theology which made theological faith sound ridiculous and contradictory. So Thomas had to baptize Aristotle because in the mid 13th century, an unbaptized Aristotle was not just a neutral pagan from the 5th century BC, but a dangerous and deliberately anti-Christian thinker. I’m sure Thomas Aquinas also loved Aristotle and rightly thought the Metaphysics and the Ethics are great stuff, but above all, this rigorist Dominican saint recognized the danger of Aristotle-the-loose-canon, whose thought had not been integrated with Christian thinking.

Bonaventure performed just the same task of mediatory integration, only not with Aristotle but with ‘radical Gospel Christianity.’ It’s well known that after Saint Francis died, the Franciscan order was split between the ‘radical’ group, who wanted the order to follow Francis very literally, and the more moderate, worldly, ‘spirit of saint Francis’ Franciscans. The first lot, the radical Franciscans also quickly got mixed up with imminent eschatology, that is, with folks who took the book of Revelation very literally and saw the life of Francis and the birth of their own Franciscan order as harbingers of the End Times, end times which would be played out in technicolour in the very near future. The radical Franciscans were fervently attached to poverty because it was all part of the literalistic reading of Scripture which made them hope that the marriage of heaven and earth depicted in the last chapters of Revelation would soon be consummated. At the time that Bonaventure took the helm as General of the Franciscan Order, in 1257 his predecessor had been put in the slammer for professing and promoting Radical Franciscan doctrines.

The radical Franciscans were known, annoyingly enough, as the ‘Spirituals.’ The moderates were called ‘Relaxati’, which brings to mind chilling out with a good glass of red wine after a bowl of spagetti. Being relaxed is obviously preferable to being grim and ‘Spiritual.’

What Bonaventure did, nonetheless, was to attempt to mediate between the Spirituals and the Relaxed, that is, between those who wanted to follow Francis’ rule literally, and who likewise took Revelation as a literal historical documentary-depiction of the End-times, and the Relaxed, who took things more lightly and prudently. If the Franciscans were going to survive in a world which did not, after all, come to its End very ‘soon’, they had to own property and they had to made provisions for that future. All of this Bonaventure saw quite clearly. He realized that Francis had to be followed not in the letter but in the spirit, if the Franciscan charism were to be made capable of transmission through the generations. But in every way that it was possible prudently so to do, Bonaventure attempted to absorb what was true in the Spirituals’ vision into his guidance of the Franciscans.

Just as Thomas recognized that his beloved Aristotle was dangerous, and so baptized and integrated that danger, so the other-worldly Bonaventure recognized that Spiritualism and eschatologism were dangerous, and therefore needed, not to be expelled and expunged, but rather integrated into the Franciscan charism. Bonaventure, too, was a mediating thinker, integrating ‘Gospel radicalism’ back into the mainstream of mendicant life. In short, he did what he could to relax the Spirituali, and to redirect their dynamism into a more prudent, tenable channel.

So Bonaventure’s theology has been spoken of an ‘expressionism,’ in which aspects of ‘the creation’ are seen to express the Creator. Bonaventure is named by Hans Urs von Balthasar as a ‘theological aesthetician,’ not least because of this tendency to think of God like an artist, expressing himself in the creation, and thus to understand divine creation as an act of ‘self-expression’ on the part of the Creator. Bonaventure is a patron saint to artists because he envisages God as an Artist.

Bonaventure turned Francis’ unique, untransmissable personal experience into a communicable theology and integrated it into the rules of the Franciscan Order. Here it where there is a real contrast with Thomas Aquinas. Thomas Aquinas is not an ‘experiential’ theologian. Bonaventure is. For Bonaventure, the bedrock of theology is experience.

If you want to read about Bonaventure, I recommend these texts. 1) very long and hardgoing: Etienne Gilson, Saint Bonaventure and Joseph Ratzinger, The Theology of History in Saint Bonaventure. This latter book is Ratzinger’s ‘Habilitation’ thesis, and its not a limpid read like some of the professor’s later works. 2) Medium range difficult would be the chapter in volume 3 of Hans Urs von Balthasar’s The Glory of the Lord: Theological Aesthetics: Clerical Styles, on Bonaventure. 3) A nice clear easy read is a much later, short(ish) sermon by Benedict XVI on Bonaventure, called “Saint Bonaventure and Thomas Aquinas: Love Sees Further than Reason.”

Grumpy is a professor of theology in the Midwest.

If you want to see all of the posts in this series, click HERE.
Posted by Janet Cupo at 5:00 AM

Email ThisBlogThis!Share to TwitterShare to FacebookShare to Pinterest
Labels: 52 Saints 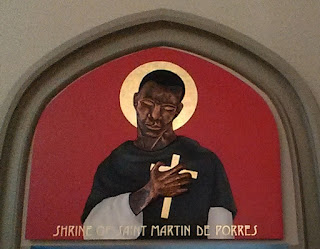